Is Bill Belichick a Design Thinker?

Posted by Creative Realities on February 2, 2012

Bill Belichick is widely regarded as a football genius, contrarian, and grump. He is also an innovator. All of the X's and O's of design thinking can be found under the hoodie. 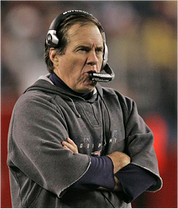 the Super Bowl, a rematch of Super Bowl XLII in 2008. The Giants won that game, ruining the Patriots bid for a perfect 19-0 season, thanks in large part to "The Helmet Catch," a miraculous fourth quarter hail mary play in which Eli Manning escaped several would-tacklers to heave a desperation bomb to David Tyree, who made a leaping grab against his helmet while absorbing a big hit from Rodney Harrison. It has been deemed the "greatest play in Super Bowl history," the "play of the decade," and--to Patriots fans like me--the luckiest, most undeserved, B.S. incident in the history of sports.

The Patriots lost three straight playoffs games since that 2008 season but are back to Super Bowl form. Certainly there are many factors that contribute to the Patriots success--including the talent on their roster, the work ethic of their players, the leadership of their veterans, and the preparation of their coaching staff--but much of the credit goes to head coach Bill Belichick (who also received much of the blame the past three seasons). Looking at what Belichick accomplished this year it struck me that his approach incorporates the key elements of design thinking:

Mike Krieger defines design thinking as "an approach to solving design problems by understanding users' needs and developing insights to solve those needs."  This understanding comes from uncovering insights through in-depth research. In football, the quarterback can be seen as the "end user" of a coach's offense because he is the one responsible for executing the scheme. Both Belichick and quarterback Tom Brady are notorious for their extensive study of game film. After breaking down enough tape, Belichick realized the fundamental problem. There is a fascinating scene in the documentary television show Bill Belichick: a Football Life in which he laments in a coaches' meeting, "take away Moss deep, come up on Welker, and we're done. We're done." The Patriots problem was that Tom Brady did not have any effective weapons other than throwing deep to wide receiver Randy Moss or inside to slot receiver Wes Welker.

Ideation is the process of generating as many potential solutions as possible. Over the past three seasons, the Patriots have come up with a variety of potential solutions to this problem. They traded away Randy Moss so the offense would be more balanced. They drafted two running backs in the second round of this year's draft. They drew up more plays for two second-year tight ends. They traded for Chad Ochocinco, and invited several other veteran wide receivers in for workouts. On the defensive side, they even signed notorious underachiever and troublemaker Albert Haynesworth. Many of these transactions were criticized at the time, and many of them did not pan out. Chad Ochocinco has been a huge disappointment and Albert Haynesworth is no longer with the team. The point is not that everything the Patriots did worked, but that they pursued numerous potential solutions, any one of which could have solved the problem. If you generate enough ideas in the ideation stage, it is not necessary to have the Midas touch because only one or two of them needs to stick.

Even the best design thinkers cannot predict what will work until they test the prototype.  No team in the NFL experiments and tests out different looks more than the Patriots. From lining up players at new positions, to substituting in new packages, to unleashing trick plays. The only thing opponents can expect from the Patriots is the unexpected. As it turned out, the formation that has proven to be mercilessly effective is the two tight end set with Rob Gronkowski and Aaron Hernandez. Gronkowski and Hernandez are two of the many players the Patriots brought in to address their offensive deficiencies. While the running backs and veteran wide receivers have not panned out exactly as some had hoped, the tight ends have been spectacular, shattering numerous offensive records this year.

Design thinking is a cycle that never ends. The Patriots continue to add new wrinkles to their repertoire. In last week's AFC championship game, Aaron Hernandez was used as a running back. Wide receiver Julian Edelman, a quarterback in college, continues to be used on defense and it would not be shocking to see him throw a pass on a trick play some day. No one knows what the future may bring. Maybe Chad Ochocinco will be the Super Bowl hero. Maybe one of those two running backs they drafted will take the league by storm next year as teams focus on stopping Gronkowski and Hernandez. Or maybe the Patriots will employ a new formation that features the fullback, allowing a new star to emerge. Who knows what Belichick has up his hoodie?

Bill Belichick and other good design thinkers zig where others would have zagged.  When confronted with the realization that their team could not do anything other than throw the ball deep to their number one wide receiver or inside to their number two wide receiver, most teams would have focused on improving their running game or upgrading their third receiver. While the Patriots explored both of these options, they also pursued a totally different route.  The Patriots are in the Super Bowl because Bill Belichick was able to redesign his offense around the two tight end set. I have no way of knowing whether he planned this all along, but my guess is he did not. Instead, I think this strategy emerged as the best solution through masterful design thinking.

The best design leaders use mantra, visuals, and storytelling to unite the team behind one common goal. The Patriots have built "The Patriot Way," a culture of hard work, commitment to excellence, and putting the team above any individual that everyone buys into--or they're gone. During the 2010 offseason, Belichick removed all the reminders at Gillette Stadium of the Patriots glory days in order to send the message to the current players that they needed to create and earn their own identity. It is the commitment to improvement that set the Patriots organization apart. Bill Belichick's harsh criticisms during film study has earned him the nickname "The Belistrator." The Patriots practices are famous for their intensity and focus.

The Patriots, and the best design thinkers, identify problems, experiment with unconventional solutions, learn from their efforts, and continue to make adjustments in a never-ending quest to improve. Here's hoping that on Sunday, the NFL title goes to the coach who exemplifies design thinking.