Should Innovation Be Top-Down Or Bottom-Up?...It Depends!

Posted by Creative Realities on September 19, 2012

We are often asked if the best way to structure for innovation is top-down or bottom-up? The answer is both if you are going to succeed in the long run.

Our motto is, “You Get What You Play For,” and the way a company structures for innovation is a clear indicator of how they intend to play with their innovation investment.

There are three levels of risk associated with the pursuit of innovation: Incremental (keeps you in the game), Breakthrough (changes the game), Transformational (changes the way we live).

What’s in a name? We find it quite amusing how in the last couple of years a growing number of companies have tagged many of their innovations as being “transformational.” Listen for it. They obviously have defined “transformational” less loftily than we have, which is why they can use their existing innovation models to pursue it. Again, structure is the clear indicator of intent. If all innovation has to flow through one model then it will most likely be an incremental one and the odds of finding breakthroughs will be quite low.

So let’s talk about incremental. It keeps you in the game. It tends to be short-term, uses familiar (traditional) metrics and development systems like Stage Gate. The risks-rewards are relatively low so incremental can be managed at the operating levels where the people know the customers/consumers best and decisions can be made in a more consensus-driven way with input and agreement between all stakeholder functions. Management involvement tends to happen only when the ideas are “ready” to be pushed up and sometimes even that isn’t necessary. Almost every company has a Stage Gate process because they work well for incremental innovation.

Incremental innovation is often disparaged because it’s not cool, sexy, or brag-able, which is a mistake because incremental keeps what the company sells relevant and competitive. Incremental is also breakthrough’s best friend because if done well it throws off the money for pursuing higher risk/higher-reward breakthroughs.

Now comes the heresy: Everything that makes incremental models work is what causes them to unintentionally kill potential breakthroughs. Why? Because consensus and familiar metrics are death to breakthrough. Breakthrough metrics and decision-making must be applied in totally opposite ways. When forced to present familiar metrics for truly out-of-the-box “beginning” ideas the work teams develop what our friend Jay Paap calls “Imaginary Numbers.” We have a biotech client whose executive leadership team, starting with the CEO, demanded net present value estimates for fledgling, “beginning” ideas…and they wondered why they weren’t launching any game-changing innovations. 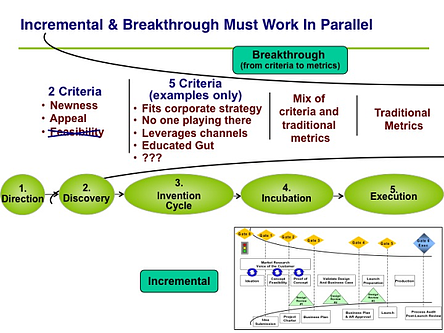 As for decision-making there is one simple rule in pursuit of breakthroughs: “The higher the goal the higher the role!” Why? Because in order to play in breakthrough an organization’s executive leadership (starting with the CEO) must be willing to play, make some of the critical strategic decisions, and provide people, money, time and air cover when the organization begins to resist change. They can’t wait until everything is “ready.” They must interact with their work teams frequently throughout all of innovation’s five phases.

They must also be willing to see value in absurdity. One of the biggest myths in innovation is, “I’ll know the big idea when I see it!” WRONG! As Albert Einstein once said, “If the idea isn’t absurd there is no hope for it.”  A model that doesn’t stimulate, value, and advocate for ideas that begin in absurdity will probably never change the game in its industries.

In most companies the radical, scary, absurd “beginning” ideas experience what we call The Bazooka Syndrome, where they don’t just get shot down; they are blown out of the water, usually by a well-intentioned management that hasn’t been engaged properly in the work flow, not because they’re close-minded.

In pursuit of breakthrough management is not the enemy, as it is so often portrayed. Nor are the troops incompetent dunderheads. It’s the process model that is broken.

Incremental is bottom-up and Breakthrough is top-down.