Posted by Creative Realities on August 24, 2010

Here at Creative Realities, we have identified some critical ideation skills that anyone can develop to become better at creative problem solving.  The first one I will discuss involves the way we listen.

In the movie Dumb and Dumber, there is a great scene in which Harry, incredulous that his girlfriend inexplicably dumped him, laments, “yeah I called her up; she gave me a bunch of crap about me not listening to her, or something, I don’t know, I wasn’t really paying attention.”  Despite the seemingly blatant contradiction, we are all familiar with that condition of trying to listen but not really paying attention.  This happens all the time in creative problem solving meetings, even when we are trying our darndest to focus and absorb everything.  In fact, it happens BECAUSE we are trying to absorb everything.  We are simultaneously trying to listen, generate ideas, and figure out when and how to present our ideas to the group.  This doomed mental juggling act follows a fairly predictable pattern known as Passive Listening.

Psychologists tell us that attention levels in a group are highest when a new speaker first starts to offer her/his thinking.  This high level of attention lasts for a very short time (usually around 6 seconds) until something causes listeners to mentally “drop out” of the conversation and think about something else.  Something has triggered a new idea or mental connection and they are off exploring it in their own heads.  They are also determining when and how to communicate the idea to the group.  This is known as the “rehearsal curve,” because the listeners are preparing to speak and looking for an opening.  When the speaker starts to wind down, attention levels briefly spike as somone new takes the floor.  The pattern then repeats itself. 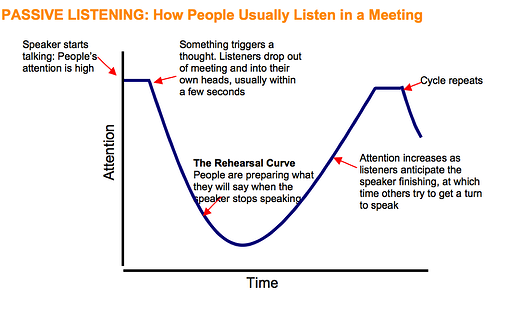 Usually, during this time, listeners are not being very productive with all of the wonderful “stuff” that is running through their heads. Short-term memory can only store about 4-7 thoughts at a time.  In order to manage the goals of listening, ideating and speaking, people tend to process information in one of two dangerously passive ways when they “drop out” as described above:

Listener Type #1 - Reactors:  In order to stay current with the conversation, this type of listener keeps absorbing new information and generating new ideas.  But, as stated above, the brain can only hold 4-7 ideas at any one time.  This can result in the loss of some great thinking because this type keeps exploring new ideas as they pop into his/her head at the expense of forgetting one from 10 minutes ago.  This means the seeds of a potentially greet idea never get shared.  They become vapor, lost in the cosmic ether.

Listener Type #2 - Hoarders:  In order to not lose the exciting ideas that arise, this type of listener puts them in a mental lock box and stops processing new sources of input until they get the chance to off-load them.  This can be especially unproductive in meetings with more than 4-5 particpants because it takes time to get the floor.  That means this type of listener spends a lot of time mentally closed off to new stimuli.

So how does one avoid the pitfalls of passive listening?  In the next Ideation Skills post I will share two strategies that have proven to be effective; one to use when speaking, and one to use when listening.

Because it is very frustrating to be given criticism about not listening, or something, when you aren't really paying attention.