Even though ours is a team-based model for creative problem-solving, we also know that team-based, consensus-oriented decision-making results in lowest-common-denominator creative ideas. At the same time, autocracy doesn’t work either. Instead, a paradoxical kind of decision-making is needed to insure that creative new ideas get implemented.

Here’s a brief history of decision-making as it has evolved in the practice of creative problem-solving. We describe it as a pendulum, and it began with a decision-making model based upon autocracy. 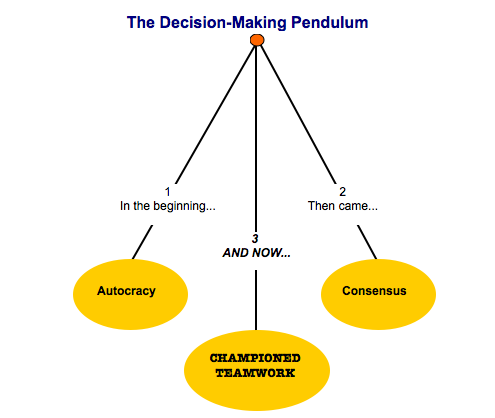 In the beginning, autocracy was the preferred method.  This involved a single leader deciding all.  While it was very efficient and streamlined, it suffers from lack of buy-in.  It also isn’t very fun for the participants.

...to consensus decision-making.  Now everyone felt good about the decisions and there were high levels of buy-in.  In fact, some groups were overheard singing “kum-ba-yah.”  However, very few groups utilizing this model for the purpose of creative problem solving ever get to an actual decision.

Now, the pendulum has settled on a decision-making model that falls between the two extremes.  Championed Teamwork is the interplay between the ideas, input and energy of the group, combined with the “client,” who is responsible for forging a direction and accountable for the results.