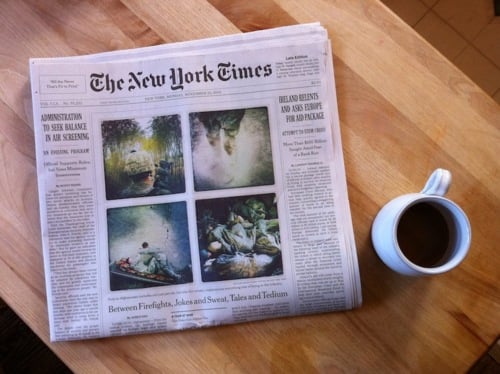 While the untrained eye might see the above as a slightly more artistic version of a typical New York Times front page, critics immediately pointed out the lack of purity or objectivity in these processed pictures. Photojournalist Damon Winter snapped these images for a feature story on the war in Afghanistan from his iPhone Hipstamatic. No expensive equipment, no assorted lens, just a $1.99 app.

In a world where Facebook is often the only way to get in touch with people and opinions are limited to 140-character tweets, many are bothered by this new innovation that allows anyone to take an artistic picture with the touch of a button. Beneath the stylized flash options and lens packages with clever names like “The Williamsburg Hispstapak”, the Hipstamatic is nothing more than a computer algorithm applied to a typical cell phone image. And some photographers can’t stand it for that exact reason. To them, there’s no sense of originality and purity in these pictures.

Here’s how I see it: Even as an amateur photographer, I don’t believe photography has ever truly been “pure” or “objective.” The photographer chooses the film type, the angle, the lens, and the aperture setting. The ever popular wide-angle lens is an example of a camera add-on that alters the viewer’s perception of reality. Black and white film produces images with a certain nostalgic sentiment attached. Even past the shooting process, the prevalence of editing software has made it almost impossible to identify a completely unaltered digital photograph. Increasing the contrast, removing flash-induced red eyes, and cropping out that awkward arm- these are all things we are guilty of as consumers in a digital world.

So while Damon Winter’s photos may stray a little further in their processing, I think the Hipstamatic effects actually complement the emotional component of these images and the raw content of war being captured. Using the same moody filters and light settings to take a picture of your sleeping dog - however cute - might not be art.  But there’s a certain “in the moment” quality in the way the blue-green hues of these pictures express the everyday life of soldiers on a combat mission.

Tying this back to innovation: While the Hipstamatic (other similar camera apps) might not be a transformational innovation in changing the world of photography, it draws so much attention and criticism because for the first time in photography, the tool itself is making the decisions. And the photographer fears this loss of control. Its incremental innovation of bundling certain effects together to create a simple tool that can produce altered images with a swipe of a button is unsettling to traditional photographers who pride themselves in their ability to adjust every aspect of their image in some digital editing tool.

I’ve tried the Hipstamatic myself. Yes, it practically forces you to take “artsy” images and personally, I don’t mind it. As an Androidographer (this term isn’t quite as popular), I’m thankful for the ability of my camera app to instantaneously save snapshots of my life. Regardless of the vintage or Polaroid effect settings I choose to use, the moment is there. And it’s the moment I care about.