That is, of course, until last week, when I received a call from him while heading home from work.

"Amanda!" he said with a voice of exasperation. 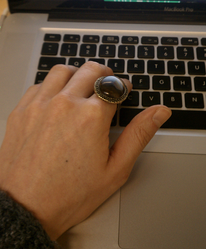 my million-dollar idea on the radio and it made me think of you." (Yes, he’s this charming in real life.)

“No, no”, he laughs, “I know you like to wear mood rings and thought about you when I heard the ad. I’m not happy to hear that my idea is making someone else a million bucks and not me.” [Note: I have a penchant for bauble rings, as evidenced by the one I’m wearing today; however, it is not a mood ring no matter how many times I remind Bobby.]

You see, it’s moments like this in life that provide rich lessons to be learned about ideas and the power of the Open-Minded Evaluation (OME):

In innovation, there are two ways to evaluate communications/ideas -- Reactively or Reflectively.

With this method of evaluation one is seeking to make an immediate and quick decision…a judgmental one. Black or white. Yes or No. Go or No Go. This type of thinking is dealing only with the facts as stated, not the intent or the possibilities.

This is evaluating with an open mind. It leaves the listener open to understanding the intent as well as the statement…the idea and the possibilities, not just the facts. In this mode one can explore an idea before making a decision.

When groups are generating new ideas those ideas will fall somewhere on The Idea Spectrum, a continuum ranging from the extremes of Worthless to Perfect. At some point along this spectrum, an idea crosses a “Threshold of Implementation.”  Be aware that most ideas are implement-able when they are offered, because they don’t have are relatively unoriginal. The conditions that make them acceptable are often feasibility and familiarity. Such ideas are not in the domain of innovation. However, the ideas that fall short of the “Threshold of Implementation” -- the ones that have flaws and raise concerns -- are where you will find innovation. 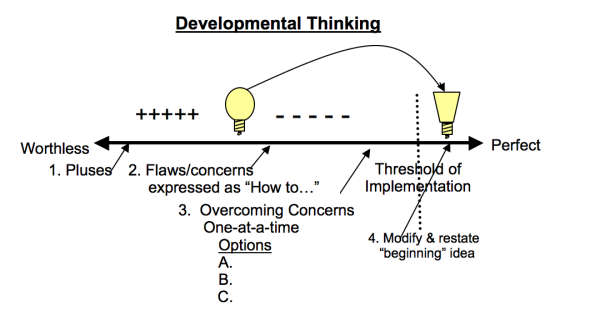 So what to take away from this story?

1. Ideas are made up of many parts; don’t throw away the whole idea just because you don’t like one part.

2. Evaluate an idea by first listing what you like about it. Then list your issues, using problem-solving language (start with “How to…”)

Unfortunately for my friend Bobby (and countless others out there who are Bazooka’d by even the closest of confidants), it’s a lesson learned a day late and a million bucks short.