Missing Pieces in the Healthcare Puzzle - An Innovationist's View

"It’s a big problem, it’s complicated and we have to solve it now."

This is the message that Massachusetts Governor Deval Patrick sent about a new plan to pull doctors and hospitals into care groups designed to promote health and specifically to reduce emergency room visits -- a major con tributor to healthcare costs. Sounded pretty good to me. Then the inevitable partisan views came crashing in to spoil the party. No matter which side of the issue you're on -- and these arguments arise in both directions -- WE as a society lose. 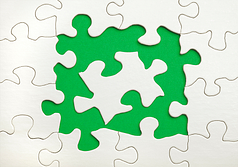 It strikes me that despite there being a glaring need to innovate our healthcare model, and massive amounts of energy being put into resolving the issue, there are at least two critical success factors for innovating that are missing --

Admittedly, the type of work that I do has me playing most often in the corporate world, in which alignment and passionate champions – while certainly not a given – are at least potentially attainable. The paradox of social innovation challenges like Healthcare Reform is that they are critical to solve but have seemingly impossible issues. So with that, I pose two open questions:

I would like to encourage a dialogue – via comments, emails, Skype, phone, even a chat over a beer – around how to answer these questions and whether there is a different set of success factors for social innovation.

Let me know if you'd like to play, as one thing is for sure: with healthcare costs per capita far eclipsing that of other industrialized nations, our current trajectory is unsustainable.