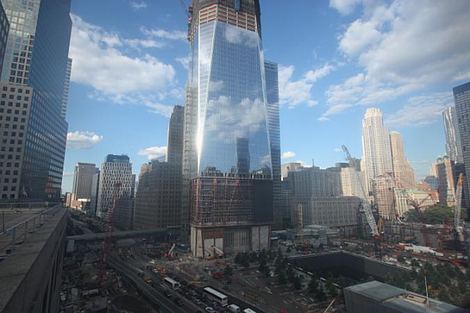 The chief architect of the reconstruction tells the story about how early in the project nobody wanted to investigate the actual ground zero site too closely.  Instead the architects sat in an office drawing up plans.  However, one day, he decided to climb down into the crater. As he was walking around the hallowed ground, he was suddenly overcome with inspiration. In that moment, he understood what the new World Traded Center needed to represent.  It was not until he actually got out of the building and came face-to-face with his gritty reality of what he was working on that he formed his vision. We can all look for opportunities to get out of the building and soak up the "worms-eye-view" on whatever we are dealing with, whether it is a physical location, customers, or employees.

Every single person involved in the reconstruction effort believes deeply in the importance of this project. Almost all the workers profiled on the show have a deep personal and emotional connection to the site.  They certainly appreciate the daunting size, scope, and technological challenges of the project but in interviews they talk more about the emotional, symbolic, and spiritual meaning, both for themselves and the country. They have immense pride in being a part of something historic and long-lasting. Every goal is charged with emotional significance. For example, the crew has set a construction goal of completing 1,000 feet of Tower One by 9/11/11, the ten-year anniversary of September 11, 2001. Winter weather slowed them down, but they used shovels, trash cans, cranes, and freight cars to haul all the snow off the building. They are now working feverishly to get back on track so they can meet the goal. Finding a goal that has real meaning and significance can inspire an entire organization to come up with creative solutions and work doggedly towards the objective.

In Creating the New, Trust the Tried-and-True Process

Everything about the reconstruction project is a combination of honoring the past and looking toward the future. This applies all the way from the layout of the memorial and design of the towers, to the construction techniques employed by the crews. The elevators in Tower One will be the fastest in the western hemisphere, capable of going from the ground floor to the top floor in a dazzling thirty seconds. The ride will be so smooth that it will feel as though the car is not even moving. In order to achieve this, the steel beams need to be aligned in a perfectly straight line all the way up the building. How does the crew building this state-of-the-art elevator ensure a perfectly straight line? With a plumb line and ruler. They hang a thin wire from the top of the building, let gravity work it's magic, and then use a ruler to line the steel beams up 1.5 inches from the line. It is the same tactic that has been used in elevator construction for years. As the crew chief said, "If it ain't broke, don't break it." When creating the latest and greatest, we should all remember that oftentimes the tried and true process works best.