In Little Bets: How Breakthrough Ideas Emerge from Small Discoveries, a fantastic 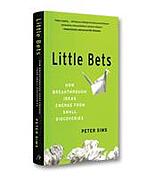 book about the creative process, Peter Sims builds a compelling case for why breakthrough ideas come about as the result of lots of little experiments. Drawing on everything from Chris Rock's method of developing stand up comedy, to the production process of the animation teams at Pixar, to the "HP Way" corporate culture inspired by Bill Hewlett and Dave Packard, to Frank Gehry's unconventional architecture designs, Sims advocates for a creative process that defies the common understanding of creativity. Sims slays the myth of the creative genius who gets hit with a bolt of inspiration out of nowhere like lightning. Sims argues that, instead, most people who are highly creative achieve success through a constant, deliberate cycle of experimenting, failing, adapting, and fine-tuning.  Here are a few of Sims key insights.

Don't Hold Your Breath for the "Eureka!" Moment

The concept of the "Eureka!" moment is, in most cases, baloney.  It is very rare that a perfect solution arrives fully formed in a flash of insight.  Even in circumstance where that flash of insight does occur, science suggests that it is actually the result of subconsciously thinking long and hard about the problem.  Just because there is a moment that you become consciously aware of the solution that does not mean that it takes only a moment to form. Instead, ideas usually come to us inchoate, with lots of potential flaws, challenges, and holes in them.  That's why Creative Realities encourages developmental thinking.  If you know that an idea does not need to be perfect right away, it is easier to get started. If you are a writer, bang out a first draft even if it is pure rubbish. It's a start, and your ideas while begin to take shape as you work through it.

Get the "Worms Eye View"

As I mentioned in a previous post, the chief architect of the reconstruction of the World Trade Center, described how it wasn't until he went down and walked around the site of Ground Zero that he understood his vision for the project.  Inspiration strikes when you're down in the trenches. It is no coincidence that visionary leaders like Bill Gates or Steve Jobs have a deep understanding of the nuts and bolts of their industry.  Paradoxically, it is their expertise in the technical details that allows them to think strategically about the macro trends of the future.

Sims emphasizes that it is impossible for anyone, even experts, to accurately predict exactly how an idea will play out and a consumer will react. Even Chris Rock, does not know which jokes will work until he tries them out on an audience.  So once you have your idea, start testing it.  In the case of a concept for a comedy bit, you need to go to a club and see where the audience laughs and where they get restless. If it is a prototype, put it in front of customers and get their reaction. Sims writes about how Proctor & Gamble has started to purposely use inexpensive, disposable prototypes--in some cases literally held together by Duct tape--for product testing. The rationale is that if consumers believe they are looking at a final product the company has poured lots of time and money into creating, they are reluctant to be too critical of it. If, however, they see a cheap, flimsy device thrown together and propped up with tape, they are more likely to think it is in the early stages of development and want to help.

Survival of the Most Adaptable

Sims suggests that what separates highly achievers from the pack is their ability to adapt. He gives the examples of numerous widely successful, innovative entrepreneurs who started out with an idea far away from the one that ended up making them famous. Starbucks, Google, and Amazon are among his examples of startups that pivoted from their original business idea. Similarly, Sims talks about the U.S. Army's shifting strategy of modern warfare. The strategic model in Iraq has shifted away from linear, order-driven commands to a more adaptive approach. The modern soldier needs to understand a variety of complex factors including the cultural norms, tribal allegiances, and local politics of the region in order to understand the impact of military action. The soldier that has the necessary knowledge, and freedom, to adapt his or her tactics to suit the situation, will be in the best position to effectively execute the Commander's Intent without creating additional problems.

At Pixar, they have a very specific method for providing feedback.  When an animator brings a clip to a director, the director responds not by criticizing, but by "plussing."  Plussing is focusing on and describing what is working and encouraging the exploration how you can further develop the good elements.  (Again, notice the similarity to Creative Realities' Open Minded Evaluation).  At Pixar, this lets the animator know what the ultimate vision looks like and gives him the creative license to fix the weaknesses.  It is also similar to one of Creative Realities innovation ground rules: No Bazookas! One of Sims main themes is that highly creative individuals create an environment in which even ideas that fail are valued and encouraged.

Sims describes a family friend who was always asking for the thoughts and opinions of everyone he met.  It didn't matter whom this fellow was talking to, he was genuinely interested in their perspective.  Sims recalls that when he was a child, this gown-up friend would always come to the kids' table and ask what was on their minds.  He asked everyone he met for their take on news, politics, sports, their occupation, and any other topic that came up.  This friend happens to be the legendary journalist Tim Russert.  Sims point is that what makes Russert great is his genuine curiosity about the opinions, ideas, and perspectives of others.  A common trait of the creative people Sims mentions is that they all had that curiosity; that fire in the belly to continue to learn.