Find the "Job to be Done"

Companies tend to think in terms of features, not problems.  The trick is to try and see your offering through the lens of your customer.  Josh Suscewicz used power drills as an example.  When people go to the store to buy a power drill, they are not going because they really need a drill; they really need a hole in the wall.  The hole is the "job to be done," to use Clayton Christensen’s term.  A "job to be done" is a fundamental task that a consumer needs to complete.  We "hire" technology to complete many of the tasks in our daily lives.  New business models spring up when a company figures out how to solve and capitalize on an unmet need.  Jay Terwilliger demonstrated this through a discussion of the rental car industry.  Hertz created a business to provide cars for business travelers when they were on the road.  They created rental centers around airports to fulfill this need.  Enterprise realized that people also needed rental cars when they were at home, perhaps because their car was being repaired.  Enterprise built their business around suburban locations and services - like offering to pick renters up.  More recently, Zipcar created a new business model for urban dwellers who wanted to rent cars for short, specific timeframes.  These three companies fulfill three different "jobs to be done" and have built three distinct business models to do so.

You Know What Happens When You Assume...

But You Probably Don't Know What You Are Assuming

One of the most common challenges with business model innovation that we heard from both the speakers and participants is that big, successful companies get so tied up in their own culture that they develop blind spots.  By focusing exclusively on the processes and standard operating procedures that made them successful, they become victims of their own success.  Josh gave two great examples of this: Sony and Kodak.  Sony missed out on the iPod/iTunes revolution because they were so engrained in the traditional music business.  Similarly, Kodak nearly missed out on the digital camera revolution because they initially viewed cheap digital cameras as inferior to the Kodak brand.  In both cases, they were focused internally on what they could deliver instead of looking externally at what their consumers actually wanted.  Philippe De Ridder shared a TED talk by Derek Sivers that nicely demonstrates how hard it is to recognize the implicit assumptions we all make without realizing it.

The key to business model innovation is to think holistically about the entire business, not just new product development.  Jay Terwilliger presented a three-dimensional framework for thinking about business models: Create Value, Deliver Value, and Capture Value.  To create value you need a value proposition that effectively differentiates your offering and fulfills a want/need for an underserved segment of consumers.  Delivering value requires determining the key activities and resources your organization will need to fulfill the value proposition.  Activities and resources include elements like physical resources, human resources, supply chain management, partnerships, and technology.  Capturing value is about creating a profitable revenue stream.  Value can be captured in a variety of ways, including one-time payment, subscription, or through advertising.  Jay explained Creative Realities Business Model Mapping method for plotting how these elements come together.  The point is that innovation can occur anywhere in the operation.  Business model innovation is about looking at the entire enterprise and developing a structure that maximizes value for all stakeholders.  The best business models, such as iTunes, "expand the pie" and increase value for the entire ecosystem. 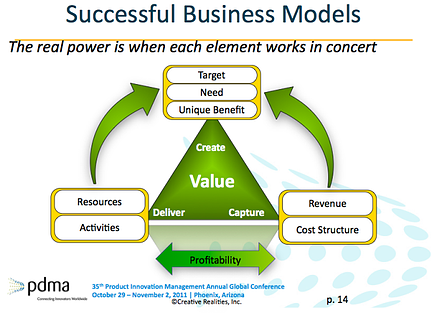 Plan for Various Future Scenarios Then Place Your Bets

The future is unknowable, but that doesn't mean we should just sit back and watch it unfold.  Business model innovation requires getting out ahead of the curve and delivering value in a way the market has not yet seen.  John Lynch described the Future Pull process EMD Millipore went through to envision their future and develop four new business models in the life science industry.  John described how a separate, autonomous team explored future trends and the impact they would have on Millipore's business.  The core team worked nearly full time on the project and included senior executives right on up to the CEO.  The team's goal was not to predict the future, but rather to consider various scenarios and contemplate the impact they would have on Millipore if they were to occur.  This framework allowed them to assess the risk and size of opportunities in new ways.  The scenarios were written up as visions for the future in a magazine format and distributed to the entire company.  Once the visions were agreed upon, the teams set about moving their ideas forward.  As John said, "dream big, then execute in small steps."  Millipore created a board that operated like venture capitalists, making strategic decisions about which opportunities to pursue and how to allocate resources.  Innovation teams "pitched" their ideas to the board for funding.

Play Around with it until it Works

Companies do not change because they want to; they change because they have to.  As mentioned above, companies tend to continue to do what made them successful in the first place and consequently oppose new, unproven processes.  The culture will resist change.  John said that there are four drivers of innovation: competition, customers/consumers, technology, and regulation.  These are fundamental forces outside of a company’s control that can disrupt their business model.  In order to stay relevant, companies need to be willing to explore opportunities that fall outside of their comfort zone.  Of course, they also need to balance that with doing enough of what they are good at to sustain their livelihood.  Vijay Govindarajan talks about the need to protect the core while establishing new capabilities.  The only way to establish new capabilities is to experiment, learn, and adapt.  It is by nature awkward and clumsy, however teams can improve their ability through training and practice.  Philip De Ridder led the group through an interactive exercise using his Board of Innovation Business Model Toolkit.  The group was given part of an example business model and each table was asked to come up with revenue models.  Using the toolkit, the groups mapped out various possibilities.  The breadth of options the five tables came up with in a mere thirty minutes is a testament to how achievable business model innovation is with the right mindset, frameworks, and tools.